I should have known it wouldn’t last, but when I sat down at my writing desk (read kitchen table) at 9am this morning having already dropped my son at nursery and been to the gym (insert smug face), I had this very unusual feeling, a feeling that I was in control of the day, I was on top of everything, I was the supermum you read about.

I harnessed the feeing and decided it was a sign and that I was about to deliver the most incredible opening Blog in the blogosphere, one so profound it would capture the worlds attention and I would be catapulted to superstardom and become the new peoples princess.

10.30am: Having spent the last 1.5 hours tapping out non sensical sentences and reading salacious gossip on the ‘daily hate’ my phone rings, It’s my sons nursery, He has a temperature and they think conjunctivitis and I need to pick him up ASAP…and there goes my masterpiece and my day.

8.30pm: I have picked up my laptop once again but this time with a slightly different attitude, having spent the day cleaning out clogged up infected eyes, dolling out calpol, trying to keep temperatures down, ending up at the Dr’s and then finally after hours of general madness (though in my usual bias Rex was a bit of a hero given the situation, he loves to laugh which in turn keeps me from collapsing) Rex is asleep, the house is in a state somewhere between trashed and vaguely liveable and I am now slumped on the sofa with Tony snoring away thinking that actually, THIS is what I set out to do with this blog, to be real, to keep a diary not a fictional novel (oooooo maybe I could write a fictional novel too????). It’s ok not to be supermum, it’s ok not to write the best piece ever, I’m pretty sure our children still think we’re ok most of the time.

Yikes, OK it’s now the following day and I still haven’t finished my post…I found myself entirely hooked on ‘The Restoration Man’ last night (I actually saw George Clarke on a flight to Ibiza last summer, and obviously being extremely mature snapped this pic of him)  and then daydreaming about my own house project…I’ll save that for another post though, I don’t need my blood pressure to get any higher after today. 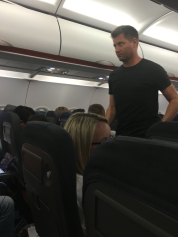 George Clarke on easyjet to Ibiza, Told ya!

Today It’s all about looking after Rex, He woke at 4.30am hysterical as his eyes were basically glued shut so he couldn’t see anything, pretty terrifying for a 1 year old. So its tracksuits on and a, do whatever you want kinda day, Tony stepped up to the plate and ‘agreed’ to watch Teletubbies with him (they irritate me to a new level), and before anyone wonders, no I’m not a pro television in the day kind of person, but to be honest if I felt like i’d been run over by a bus and had my eyes constantly sticking together i’d want to crash on the sofa and watch crap tv too. 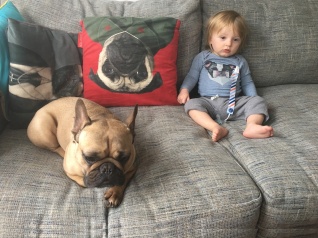 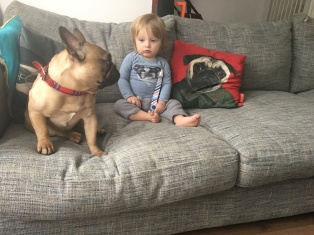 So there we go, my first Blog wasn’t anywhere near what I thought it was going to be, but that’s the nature of life, no day ever goes entirely to plan.